Self Defense Family is one of the most innovative and adventurous bands in contemporary independent music. Though vocalist Patrick Kindlon (also a founding member of the noise-punk band Drug Church) has historically held the band's center through its many incarnations, SDF is best described as a loose collective of musicians spread across the U.S. and Europe. There are about two dozen current and past members– tours and studio projects are scheduled based on whoever is available at the time. As such, no single member of SDF has played every show or played on every recording.

SDF formed in Albany, NY in 2003 as End of a Year. Under the EOAY moniker, they released three albums and an EP, including Disappear Here (Oneohfive, 2004) and Sincerely (Revelation Records, 2006). But it was their third album, You Are Beneath Me, released in 2010 on Converge frontman Jacob Bannon's label, Deathwish Inc., that earned them greater national and international acclaim. Where the first two EOAY records were influenced by the more melodic D.C. hardcore bands (Rites of Spring, Embrace, Fugazi), You Are Beneath Me meshed post-hardcore with elements of indie rock: tense guitars, idiosyncratic lyrics, tight rhythms, and verse-heavy songs uninterested in heavy hooks or choruses. It was the band's most focused work up to that point, described by one critic as "a start to finish album. No fillers."

In late 2010, the band officially changed their name to Self Defense Family to better suit their evolving sound and the endless roster of touring and session musicians. In an essay, Kindlon compared the transition to Will Oldham's string of name changes. Between 2013 and 2015, SDF released two full-length albums, an EP, a mini-LP, and a handful of singles. Their 2013 EP, You Are Beneath Her (Iron Pier)– the first of two 'duets" records– was produced in collaboration with singer and longtime SDF member Caroline Corrigan whose restrained and polished vocals contrast beautifully with Kindlon's fervent, raw delivery. The four-track EP featured re-recorded versions of songs from 2010’s You Are Beneath Me. A year later they released the follow-up mini-LP, Duets, which contained five new songs with overlapping themes that built on the band's distinctive approach while integrating new elements of indie and alternative rock.

Their 2014 album, Try Me (Deathwish, Inc.), was their first full-length record released under the Self Defense Family name. Try Me featured the now-usual sprawling riffs while also spurning typical album conventions and including two interview tracks with veteran adult film star Jeanna Fine that clocked in at a combined 39 minutes. Pitchfork called the record a "welcome deviation from the post-hardcore playbook." A year later, SDF released their most recent full-length LP, Heaven is Earth (Deathwish Inc., 2015), which opens with the evocative line, "the earth is not my concern," before delivering abrasive yet tonally rich tracks free of gimmicks and hooks.

In 2015, Self Defense Family released a new two-song 7” single on Iron Pier, recorded with J. Robbins (Jawbox, etc.) and soon after, the MLP Colicky on September 9th, 2016, also on Iron Pier. Self Defense has also recently released several other EPs on a variety of labels.

What’s next for a band with an expansive range, an interchangeable lineup, and a take-no-prisoners attitude is anyone’s guess. But what’s certain is that SDF will continue to create music that’s challenging, contrarian, unconventional, and sonically complex. Or to quote Kindlon from an interview with Ghettoblaster Magazine: "There’s no real payoff to this if you don’t do it your own way." 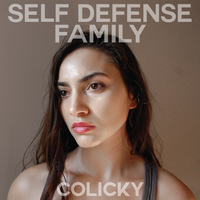 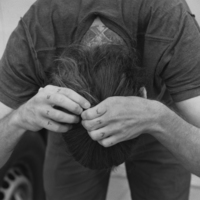 Self Defense Family - "When The Barn Caves In" 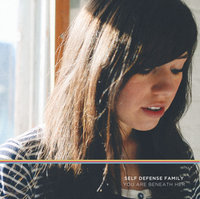 Self Defense Family - "You Are Beneath Her" 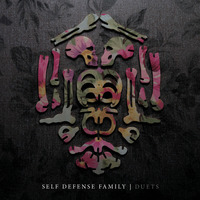