Chomper is the new Brooklyn noise-rock band featuring members of rock greats– Mark Shue in Guided by Voices and Beech Creeps, Nick Chiericozzi and Mark Perro in The Men, and Russell Hymowitz in Dream Police and Junk Boys, to name a few – resulting in a pile-driving, psychedelic collaboration that will lay you flat.

Medicine Mountain is their debut album to be released November 10th, 2017 on the Iron Pier record label.

Chomper was originally the brainchild of Shue, and brought into form by a fateful collision with old friends in Brooklyn. It’s the kind of collaboration that arises more so from the classic "we should jam together" conversation – "We were persistent!" recalls Hymowitz – than from philosophical calculation, but worse things can materialize from bump-ins. The band immediately came together, cutting their teeth at cheap rehearsal spots with a simple MO: play loud, loose, and stress-free. "We just wanted to push a simple, powerful energy forward." says Shue. "No over-thinking or hesitation."

The band initially began gigging around New York with Hartwick Hanson on guitar, who soon relocated to the West Coast and was replaced by Nick Chiericozzi of The Men. "I was the final piece of the puzzle, but maybe not by design," says Chiericozzi. "Maybe I was the final screw you found rolling around in the box." Thus, the final lineup was born, built on total trust and without baggage or expectations. And it comes through on this debut – Chomper kicks up a racket that displays an uncommon joy and brotherhood between the members and a mutual enthusiasm for rock 'n roll.

Medicine Mountain was recorded to two-inch tape in one day, with Travis Harrison (Guided by Voices, ESP Ohio, Beech Creeps) behind the boards. The sheer velocity of this process seems to have brought out Chomper at its wildest, though shot through with a crucial dose of great songs and pop smarts. Whether you’re familiar or not with the members' sizable resumes, Chomper prefers to let its noise do the talking. Just listen. 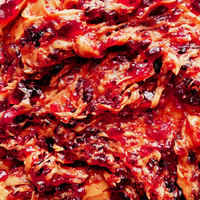